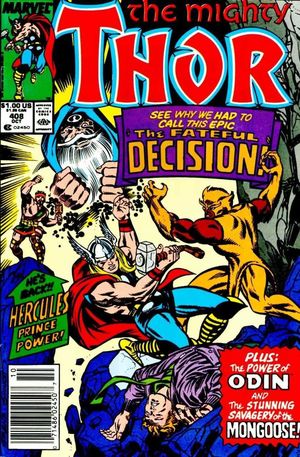 Cover pencils by Ron Frenz, inks by Joe Sinnott. First appearance of Thunderstrike (cameo) in "The Fateful Decision!", script by Tom DeFalco (plot and script) and Ron Frenz (plot), pencils by Ron Frenz, inks by Joe Sinnott (finishes); Hercules, High Evolutionary, Eric Masterson, and Thor have returned to Wundagore; High Evolutionary tells them they should leave because they are returning to study the Black Galaxy; Mongoose attacks and during the battle, Eric lifts Mjolnir, but receives a fatal blast before he can strike; Hercules manages to drive Mongoose off and Thor pleads to Odin to spare Eric; Eric becomes Thor. "There Dwells a Monster!", script by Tom DeFalco, pencils by Mike Mignola, inks by Bob Wiacek; Thor goes to the Land of the Trolls, to stop their raids on the countryside at the source; The Rock Trolls capture Thor and present them to their leader, Grundor the Greater.