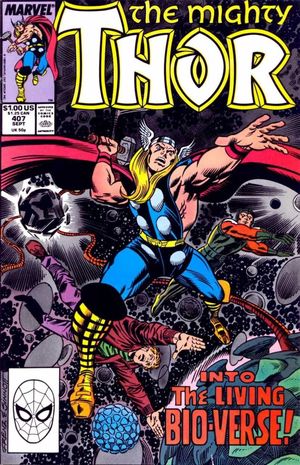 First $1.00 cover price. Cover pencils by Ron Frenz, inks by Joe Sinnott. "Menace of the Living Universe," script by Ron Frenz (plot) and Tom DeFalco (plot and script), pencils by Ron Frenz (layouts), inks by Joe Sinnott (finished art); Thor, Eric, and the Knights arrive in the Black Galaxy to try and free the High Evolutionary and Hercules; They battle strange organisms that Thor recognizes as existing inside the Celestial he fought; They make their way to the null bomb the Colonizers sent to destroy the Black Galaxy, and Thor redirects the blast; On top of the mountain summit, they discover another Celestial along with Hercules and the High Evolutionary trapped inside strange containers; A surge of energy builds and they are all witnesses to the birth of a new Celestial. Letter to the editor from Charles Novinskie of Topps Comics.