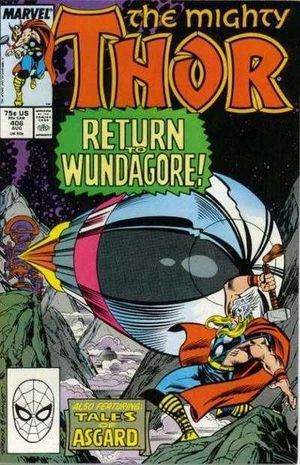 Last 75-cent cover price. Cover pencils by Ron Frenz, inks by Joe Sinnott. "War With Wundagore!", script by Tom DeFalco (plot; script) and Ron Frenz (plot), pencils by Ron Frenz, inks by Joe Sinnott (finishes); Thor flies to Wundagore and easily defeats the Knights; Count Tagar is revealed as the mystery man that has been after Thors tissue samples; Mongoose has gone insane, but Count Tagar only wants to bring Hercules and the High Evolutionary back from the Black Galaxy; Thor agrees to help and Eric comes along. Hercules has become one with the Black Galaxy which makes their task all the more difficult. "Let There Be Life!", script by Tom DeFalco, art by Tony DeZuniga; Ulagg performs his task and uses a branch of Yggdrasil to restore life to a lifeless world - Midgard.