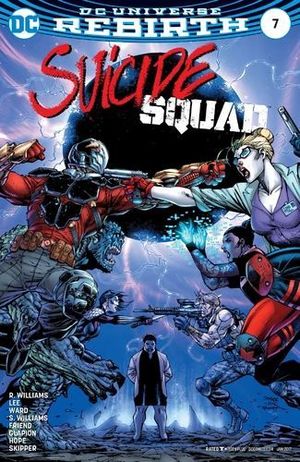 DC Universe Rebirth - The Black Vault: Part 7 - Written by Rob Williams. Art and Cover by Jim Lee and Scott Williams. 'THE BLACK VAULT' part seven! While Task Force X's overseers debate the team's purpose, the Suicide Squad gets a well-deserved day off-until the dark energies of the Black Vault drive everyone in Belle Reve Penitentiary to acts of violent, bloody madness. Everyone except the crown princess of crazy, Harley Quinn, who's somehow been…cured? Features an Enchantress backup story. When a high ranking government official's home is transformed by a demon into the mouth of Hell, Amanda Waller sends Enchantress in to plug the hole. But the witch-demon that inhabits June Moone's body runs into an old friend, a monster from the deep who promises to free the Enchantress from Waller's clutches once and for all!