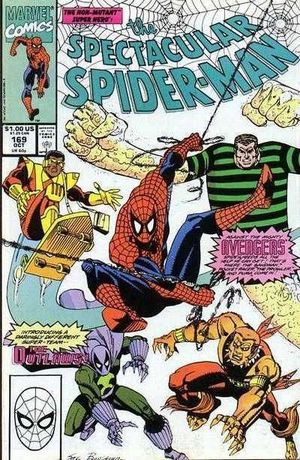 Avengers. "The Outlaw Trail" Part 2 of 3. Guest-starring the Avengers. Script by Gerry Conway. Pencils and Inks by Sal Buscema. Cover by Sal Buscema. The Amazing Spider-Man is not satisfied with the Avengers' explanation for the ambush by She-Hulk in the previous issue. But if the web-slinger is planning to take on Earth's Mightiest Heroes, he better recruit some heavy-weight talent to fight alongside him! How about the Prowler, Puma, Rocket Racer, and Sandman? Meanwhile, Mary Jane meets Jason Jerome at a bar with the intent of telling him to buzz off, but the meeting does not go as planned. Cameo appearance by the Kingpin and Space Phantom.