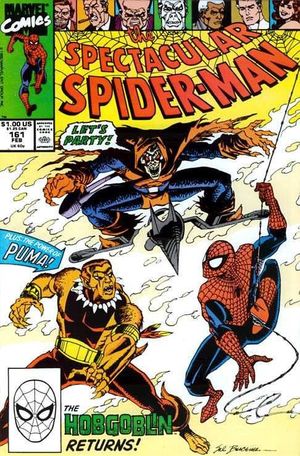 Hobgoblin in "Pardoned!" Script by Gerry Conway. Part 1 of 3. Pencils and Inks by Sal Buscema. Cover by Sal Buscema. The President of the United States grants Joe Robertson a pardon for his silence 20 years ago. Robbie is a free man again! However, his days of bliss are short-lived after Hammerhead offers a contract to the Hobgoblin (aka Jason Macendale) to kill Joe. Can the web-slinger and the Puma stop the demonic Hobgoblin? Cameo appearances by Mr. Fantastic, Hammerhead, and Tombstone.