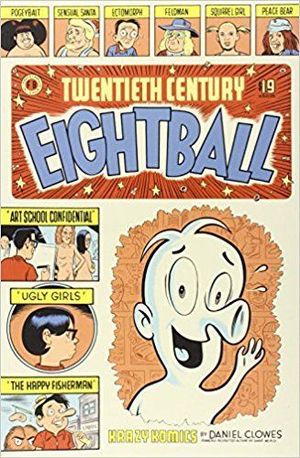 Twentieth Century Eightball collects the very best humor strips from Eightball, written and drawn between 1988 and 1996. Included within are such seminal strips/rants as "I Hate You Deeply," "Sexual Frustration," "Ugly Girls," "Why I Hate Christians," "Message to the People of the Future," "Paranoid," "My Suicide," "Chicago," and over three dozen more. Other favorites include "Art School Confidential," one of Clowes' most popular strips of all time, which was adapted into a major motion picture that re-teamed Clowes with Ghost World director Terry Zwigoff. Also included is Clowes' hilariously Freudian deconstruction of professional athletes, "On Sports," which caused a stir in San Antonio when reprinted in the city's most popular weekly paper, prompting an advertising boycott and demands for the paper to be destroyed by local sports fans. Also on display is Clowes' absurdist sense of humor, from strips like "Zubrick and Pogeybait" and "Hippypants and Peace-Bear" to "Grip Glutz," "The Sensual Santa," and "Feldman."