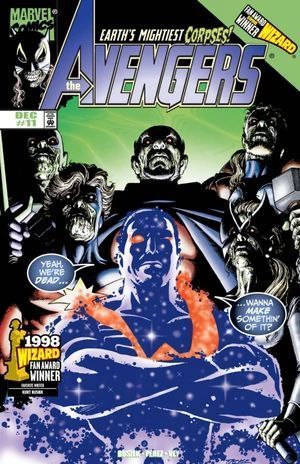 Halloween Issue - "...Always an Avenger!" Part 2 of 2. Cameos by Spider-Man, Daredevil, and the Fantastic Four. Story by Kurt Busiek. Art by George Perez, Al Vey, and Bob Wiacek. Captain Marvel, Doctor Druid, Hellcat, Mockingbird, Swordsman, Thunder-Strike, and Wonder Man all fell in the line of duty while serving in the ranks of the Avengers. So why would they come back from the dead just to destroy the team they once were apart of? Because they're all now slaves under the power of the deadly Grim Reaper, that's why!