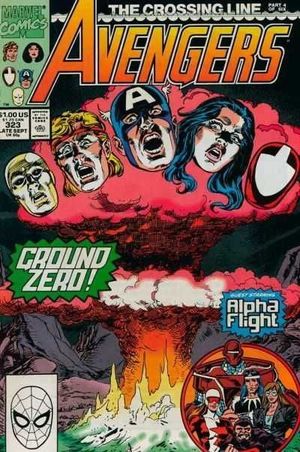 "One World's Not Enough for All of Us" Part 5 of 6. Guest-starring Alpha Flight and Stingray. Script by Fabian Nicieza. Art by Rik Levins (breakdowns) and Tom Palmer (finishes). Cover by Paul Ryan and Tom Palmer. Disaster strikes! In unbelievable fashion the atomic warheads on the Waterwind explode! And in a matter of seconds the deadly radiation and intense heat sweep over Newfoundland! Is this beautiful province destined to become a nuclear wasteland? Sadly, it appears so. But thanks to Shaman's incredible power not all hope is lost! By inverting his mystic pouch, Shaman opens multiple dimensions to temporarily hold the lethal radiation! However, his actions also send the heroes, villains, and civilians into those same dangerous dimensions! Under the guidance of Sersi and Fantasma, the members of the People's Protectorate, Alpha Flight, Earth's Mightiest Heroes, and the Atlantean Army scratch and claw their way to the dimensional nexus! The nexus is the only way back home! But it's thoroughly contaminated with nuclear fallout and guarded by the Combine! The Avengers need a miracle! Otherwise it's going to be a long winter in Newfoundland…a long nuclear winter! Alpha Flight Lineup: Guardian, Box, Diamond Lil, Puck, and Shaman. Avengers Lineup: Captain America, Quasar, Sersi, and the Vision. Second Story: "The Man and the Wolf" Part 5 of 7. Script by Mark Gruenwald. Pencils by Brad Vancata. Inks by Mickey Ritter. After test driving the Avengers' new shuttle car, John Jameson see a shiny stone laying on the floor. And when he picks it up, his personal demon appears…the Man-Wolf! Cameo appearance by Mother Night.