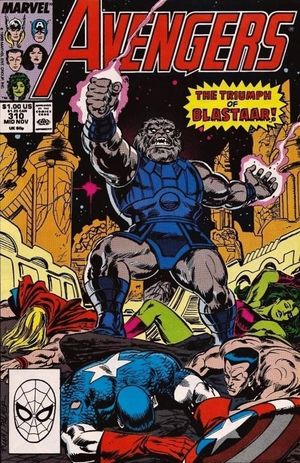 "Death in Olympia!" Guest-starring Sersi, the Eternals, and the Warriors Three. Script by John Byrne. Art by Paul Ryan (breakdowns) and Tom Palmer (finishes). Cover by Paul Ryan and Tom Palmer. One of the Negative Zone's resident bad guys has taken over Olympia! And now after dispatching the Eternals, Blastaar ambushes the Avengers! With his powerful blasts, the Living Bomb-Burst quickly thins the heroes' ranks! Leaving the god of thunder to battle Blastaar alone! But Asgardian-style help is on the way from Fandral, Hogun, and Volstagg! If the Mighty Thor can keep Blastaar at bay for a few more minutes, the Warriors Three along with the Avenging Son may be able to box in the Living Bomb-Burst…and restore Olympia to its former glory! Cameo appearances by Odin and Loki. Flashback cameo by Annihilus. Avengers Lineup: Captain America, Gilgamesh, She-Hulk, Thor, and the Sub-Mariner.