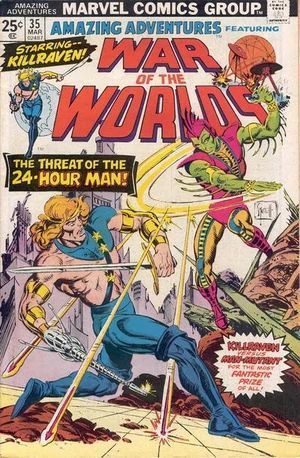 Cover by Craig Russell. "The 24-Hour Man," script by Don McGregor, pencils by Craig Russell (layouts) and Keith Giffen (finished art), inks by Jack Abel; Atlanta, Georgia October 2019: Killraven and his Freemen cross paths with a woman who had been impregnated by a creature she has called G'Rath, a Martian mutate which can impregnate human females; This gets them caught up in a battle with the creature, and its off-spring, Emmanuel; Dubbed the 24-Hour Man because his 24 hour life span, Emmanuel is instantly drawn to Carmilla and kidnaps her to bring her to be G'Rath's next mate, before his time runs out; However, Killraven, M'Shulla and Old Skull work together to stop this from happening, Killraven killing G'Rath, and Emmanuel expiring after his 24-hour lifespan has ended.