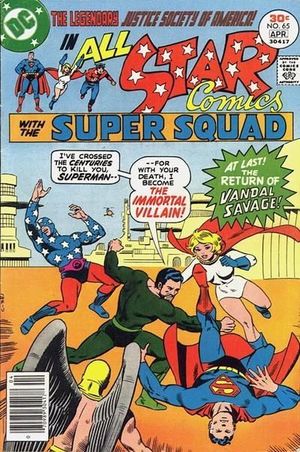 Cover art by Wally Wood. The Master Plan of Vandal Savage starring the All Star Super Squad, script by Paul Levitz, Paul Kupperberg, and Wally Wood (plot), art by Wally Wood; The JSA/Squad face off vs. Vandal Savage (who kidnapped Power Girl last issue), so he can regain his lost immortality once he acquires Superman's powers; The team has to face him under the influence of an alien planet containing 2 green kryptonite suns, since it gives him an even but unfair advantage vs. the Man of Steel; Of course Superman bests him, and they return to Earth-2 victorious, ready to face off vs. the Injustice Society next. That Dirty Beach Hostess ad starring Aquaman, pencils by Curt Swan, inks by Vince Colletta.