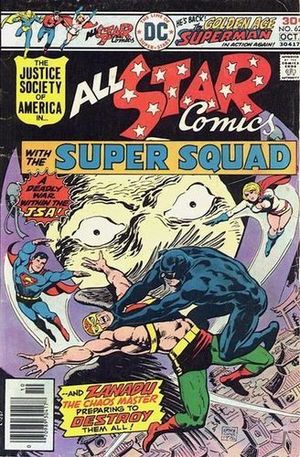 Cover art by Ernie Chan. When Fall the Mighty starring the All Star Super Squad, script by Gerry Conway (plot) and Paul Levitz (script), pencils by Keith Giffen, inks by Wally Wood; As Dr. Fate lies near death after being injured by Vulcan in the previous issue, Zanadu kidnaps Hawkgirl. Superman (who has come out of retirement to help the JSA/ Super Squad) is entombed alongside his cousin Power Girl by Zanadu; Wildcat suddenly attacks Hawkman after he appears to be hypnotized by strange music as the rest of the team faces off vs. Zanadu elsewhere