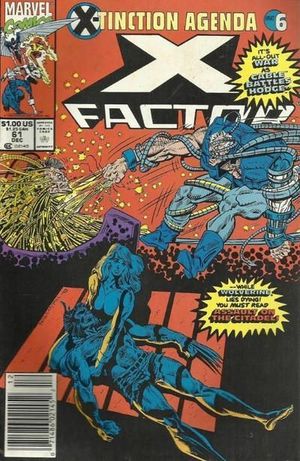 X-Tinction Agenda! Part 6 of 9. "Betrayal!" Guest-starring the X-Men and New Mutants. Story by Louise Simonson. Art by Jon Bogdanove, John Caponigro, and Al Milgrom. Story continued from New Mutants #96. Warlock was the first to die in this undeclared war on mutants. Storm and Wolfsbane are mindless slaves under Genoshian control. The X-Men, New Mutants, and Jean Grey have all been captured. Now, the remaining members of X-Factor, Cannonball, and Banshee try desperately to free their friends and make sense of the senseless violence that has been visited upon them. Plus, witness one of the most unbelievable kisses between Jean Grey and a dying Wolverine. Story continues in Uncanny X-Men #272.