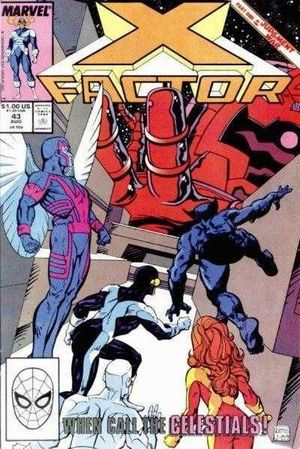 Judgement War! Part 1 of 7. "Kidnaped!" Story by Louise Simonson. Art by Paul Smith and Al Milgrom. A powerful force usurps control of X-Factor's ship and pulls it to the far side of the universe. For reasons unknown, the space-gods known as the Celestials have called upon the sentient ship, but have no need for the mutant passengers. Suddenly, X-Factor finds themselves in the midst of a raging battle on an unfamiliar planet. Things go from bad to worse as the team is separated, injured, and on the verge of annihilation.