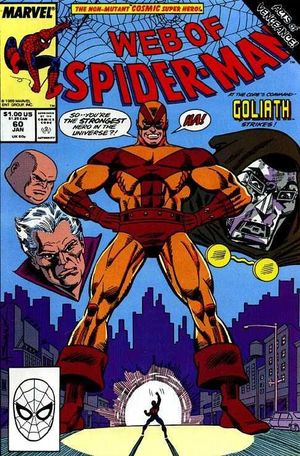 "Acts of Vengeance" tie-in. Cosmic powered Spider-Man; Doctor Doom, Goliath. "The Harder They Fall" Acts of Vengeance crossover. Story by Gerry Conway. Art by Alex Saviuk and Keith Williams. Cover by Alex Saviuk. The cosmic-powered Spider-Man and Goliath (aka Eric Josten) battle on the Triborough Bridge! After another effort-less victory by the cosmic web-slinger, Peter Parker visits his Aunt May looking for advice on his new powers. Later on, Goliath attacks Spider-Man again -- this time at Battery Park. Will the result be any different? Cameo appearances by the Kingpin and Magneto.