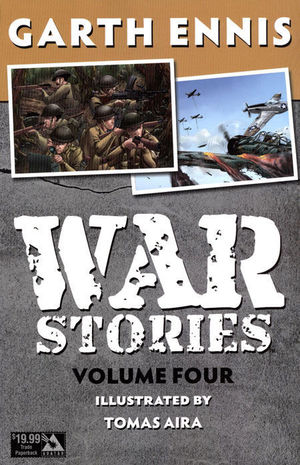 (W) Garth Ennis (A/CA) Tomas Aria Cover & Art: Thomas Aria Writer: Garth Ennis Garth Ennis' visionary series reaches deep into the recesses of history and finds the most spine chilling tales of conflict and war throughout the modern era. This new volume delivers powerful stories that illustrate the horror and humanity within the violence and misery. In this tome are two stories written by Ennis and illustrated by Thomas Aria including: Our Wild Geese Go: 'T'was England bade our wild geese go, that small nations would be free...' In the Second World War, any Irishman wanting to fight the Nazis had to join the British army- the Republic of Ireland having declared neutrality when the war began. Now, a small unit of Irish soldiers join the advance into Germany- where the going is rough and the enemy nowhere near surrender. And old tensions remain from Ireland's own struggle for independence, as well as the bloody civil war that followed. The Tokyo Club: How do you join The Tokyo Club? Simple. You climb into your single seat, single engine fighter- loaded with fuel and ammunition- and f