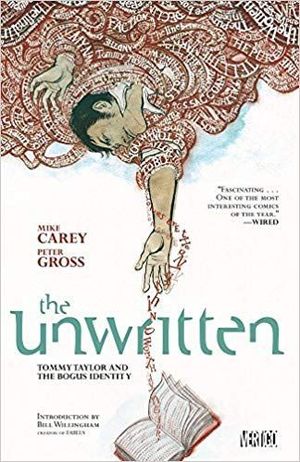 Volume 1 - 2nd and later printings. "Tommy Taylor Bogus Identity!" Collects Unwritten (2009-2013 DC/Vertigo) #1-5. Written by Mike Carey. Art by Peter Gross. Cover by Yuko Shimizu. Tom Taylor's life was screwed from the word go. His father created the mega-popular Tommy Taylor boy-wizard fantasy novels. But dad modeled the fictional epic so closely to Tom that fans constantly compare him to his counterpart, turning him into a lame, Z-level celebrity. When a scandal hints that Tom might really be the boy-wizard made flesh, Tom comes into contact with a mysterious, deadly group that's secretly kept tabs on him all his life. Now, to protect his life and discover the truth behind his origins, Tom will travel the world, to all the places in world history where fictions have shaped reality. From Bill Willingham to Ed Brubaker, from the LA Times to Ain't It Cool News, THE UNWRITTEN has won over fans, critics and pros. Now, don't miss the first collected edition featuring the first five issues of the overwhelmingly acclaimed Vertigo series.