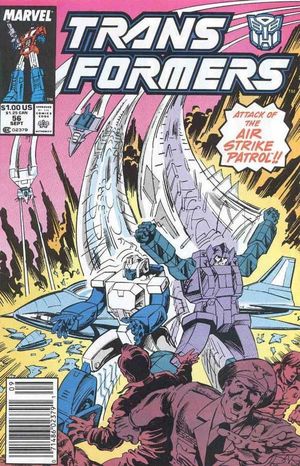 Early comic book version of the famous transforming robots. While Ratchet, the Autobots chief surgeon, is haunted by his failed attempts to save injured and broken Autobots, the Decepticons Air Strike Patrol strikes at and takes over an air force base and its Optimus Prime and company to the rescue in Back from the Dead. Script by Simon Furman and art by Jose Delbo & Dave Hunt. Issue also has profile pages on Battletrap, Blot, and Cutthroat Decepticons and Goldbug, Rollbar, and Wide Load Autobots.