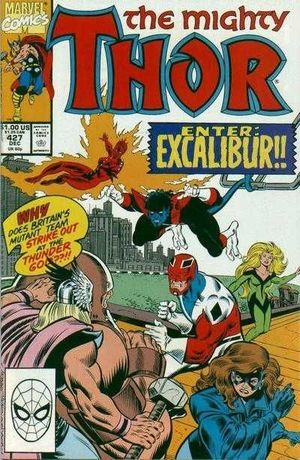 Cover pencils by Ron Frenz, inks by Joe Sinnott. "The Homecoming! or How Do You Spend the Night After You've Saved the Universe?", script by Ron Frenz (plot) and Tom DeFalco (plot and script), pencils by Ron Frenz (layouts), inks by Joe Sinnott (finished art); Thor returns to earth and immediately begins to take care of Eric Masterson's personal business; The British government sends Excalibur to America to apprehend the Juggernaut; Fed up with the instability of the Wrecker, Enchantress sends out an Asgardian beacon to lure him into a trap; All parties, Thor, Excalibur and the Wrecking Crew, converge on the beacon and begin to battle. Appearances by Captain America, the Enchantress, Ulik, Thunderball, and Bulldozer. Cameos by Juggernaut, Spider-Man, Quasar, and Doctor Strange.