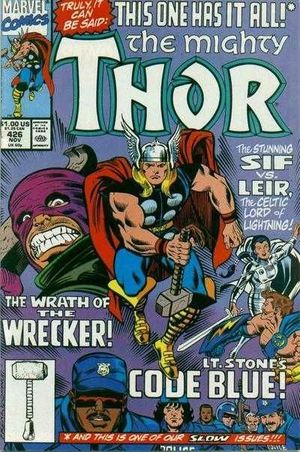 Cover pencils by Ron Frenz, inks by Joe Sinnott. "Aftermath!", script by Ron Frenz (plot) and Tom DeFalco (plot and script), pencils by Ron Frenz (layouts), inks by Dan Panosian and Joe Sinnott (finished art); In the aftermath of the battle against Surtur and Ymir, Odin returns; He places Heimdall on the throne while he prepares for Odin-Sleep; Heimdall restores the Rainbow Bridge; On Midgard, the new police task force Code Blue rescues a hostage from the Wrecking Crew but is unable to apprehend the Wrecking Crew itself. "Here a Giant Abides!", script by Tom DeFalco, pencils by Herb Trimpe; Officer Kyle Brock resumes his Earth-Lord identity to save his partner when they are trapped in a shoot-out with a street gang. Bullpen Bulletins.