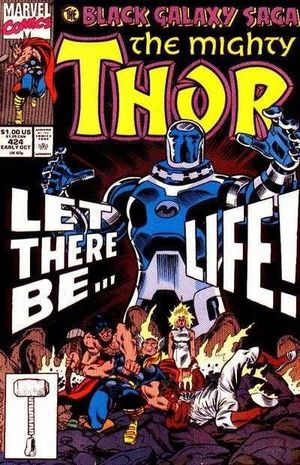 Cover pencils by Ron Frenz, inks by Joe Sinnott. The Black Galaxy Saga concludes with "Let There Be Life!", script by Ron Frenz (co-plot) and Tom DeFalco (plot; script), pencils by Ron Frenz (layouts), inks by Joe Sinnott (finished art); High Evolutionary connects himself to the Analyzer to record every bit of data as the new Celestial is being created; Stellaris attempts to destroy the Celestial by causing her armor to overload, which was the final component needed to give birth to the new Celestial; As the Celestial rises up to join its brethren, it releases one of the containers that make it up, inside are Hercules and Eric; Then the Black Galaxy is no more, having been completely absorbed by the new Celestial. "The Great Deception!", script by Tom DeFalco, pencils by Gary Hartle, inks by Dan Panosian; Odin transforms into Surtur and fights Ymir, but in defense of Asgard? Letter to the editor from Charles Novinskie of Topps Comics.