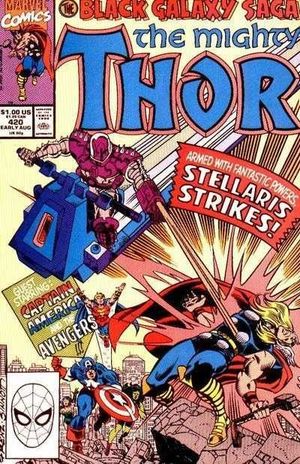 Cover pencils by Ron Frenz, inks by Joe Sinnott. The Avengers and Captain America guest star in The Black Galaxy Saga part 2 of 6, "If Death Be My Destiny!", script by Ron Frenz (Co-plot) and Tom DeFalco (plot & script), pencils by Ron Frenz (layouts) and Rich Yanizeski (art assist), inks by Joe Sinnott (finished art); Stellaris is after the Replicoid, wanting vengeance against the Celestials; Thor and the Avengers fight her off, but not before she kills the Replicoid; Stellaris then sets out after another, reading of Celestial energy – Hercules; Hercules is alone watching Kevin, while Susan and Sam go to meet with Marcys lawyers; In Asgard, Odin sends the Warriors Three to Jotunheim to investigate rumors of a monstrous beast terrorizing the countryside. Tales of Asgard back-up, "Deadly Discoveries!", script by Tom DeFalco, pencils by Gary Hartle, inks by Dan Panosian; Odin sends the Warriors Three on a quest and Heimdall is warned that Odin is not who he thinks he is. Bullpen Bulletins.