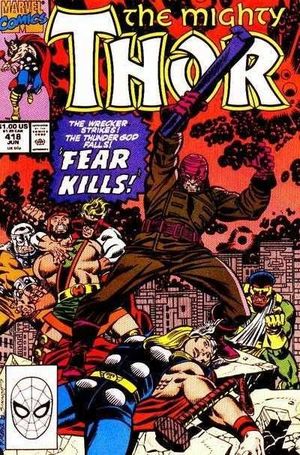 Cover pencils by Ron Frenz, inks by Joe Sinnott. "Fear Kills," script by Ron Frenz (Co-plot) and Tom DeFalco, pencils by Ron Frenz (layouts), inks by Joe Sinnott (finished art); Ulik teaches the Wrecker about his powers, and he learns some new abilities; They attack Hercules, and his fears from the beating he once received from them resurfaces; Thor shows up and realizes that for his friend to ever regain his confidence, Thor must take a dive. Seeing his friend take a beating brings the old Hercules back, and the two easily send the Wrecking Crew running. Tales of Asgard back-up, "Where Lies My Loyalty?", script by Tom DeFalco, pencils by Gary Hartle, inks by Mike DeCarlo; Sif has agreed to marry Leir, on the condition that he takes her to Midgard to warn Thor of the barrier surrounding Asgard; Vizier goes to inform Odin, but its really someone else impersonating Odin, someone who imprisons Vizier in a crystal.