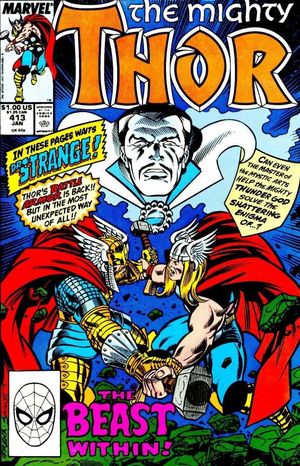 Cover pencils by Ron Frenz, inks by Joe Sinnott. Doctor Strange makes a brief appearance in "Within Me Dwells a Monster!", script by Tom DeFalco (plot and script) and Ron Frenz (plot), pencils by Ron Frenz, inks by Joe Sinnott (finishes); Thor and Hercules visit Dr Strange to learn the secret behind his attacks of weakness; He learns that it was Loki who secretly ensorcelled him; During their study, Ulik begins to pound on the shield surrounding the Sanctum, and Hercules feels another wave of fear; To fight it, he races after Ulik. Brief appearances by Hercules and Loki. "Defiance Means Death!", script by Tom DeFalco, pencils by Ron Lim, inks by Mike DeCarlo; Beta Ray Bill frees the psychic prisoners and uses the pirates own psychic energy to power the ship so the former slaves can go home.