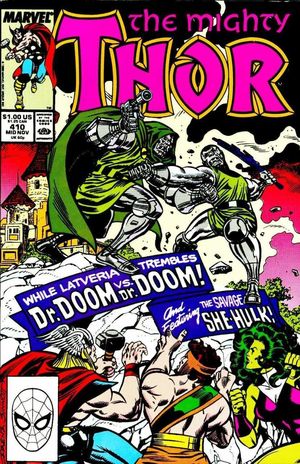 Cover pencils by Ron Frenz, inks by Joe Sinnott. "Two Dooms to Destroy Me!", script by Tom DeFalco (plot and script) and Ron Frenz (plot), pencils by Ron Frenz, inks by Joe Sinnott (finishes); Hercules, She-Hulk, and Eric fly to Latveria in a Quinjet; Doom has already gotten there, and using Thors hammer, creates a time bubble around Doomstadt causing everything inside to stop; But Kristoff foresaw such an event and made himself immune to the effects; At the time device, Hercules feels another wave of fear, and Eric manages to reclaim Mjolnir. Guest starring She Hulk. "Volstagg the Lion of Asgard," script by Tom DeFalco, art by Herb Trimpe; A drunken Volstagg winds his way home, and stops himself from being robbed. 36 pgs., full color.