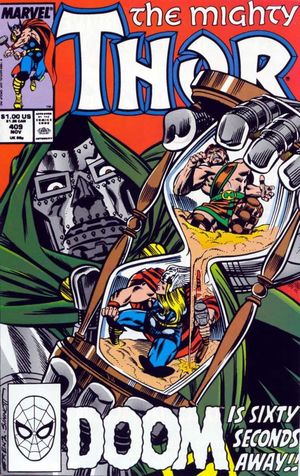 Cover pencils by Ron Frenz, inks by Joe Sinnott. First full appearance of Thunderstrike in "Doom Is Only Sixty Seconds Away," script by Ron Frenz (plot) and Tom DeFalco (plot and script), pencils by Ron Frenz (layouts), inks by Joe Sinnott (finished art); Thor stops two jewel thieves who have been given high tech equipment by Dr Doom; He has a plan that involves Thor in regaining control of Latveria; Doom sends the Timebot to attack Thor and Hercules; Hercules begins to fear for some reason, while Thor has another dizzy spell; During the battle, Doom succeeds in his plan to steal Mjolnir. Cameos by Spider-Man and Captain America. "To Fight The Unbeatable Foe," script by Tom DeFalco, pencils by Mike Mignola, inks by Bob Wiacek; Thor attacks Uroc with a blast from Mjolnir, but the demon only redirects it; Thor taunts Uroc, causing him to strike and fall into the bottomless Chasm of Eternal Sorrow.