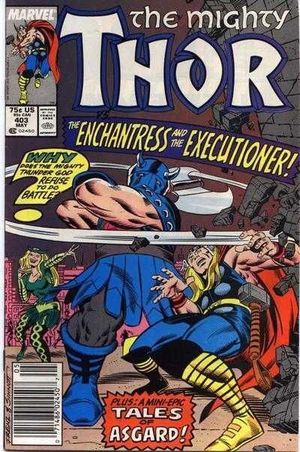 Cover pencils by Ron Frenz, inks by Joe Sinnott. "When the Executioner Calls!!", script by Tom DeFalco (plot and script) and Ron Frenz (plot), pencils by Ron Frenz, inks by Joe Sinnott (finishes); Thor battles Quicksand, but its just a distraction; Mongoose and his shadowy partner activate a device which takes skin samples from Thor; In Asgard, waves of dizziness and nausea plague the Asgardians, with no known cause; The Enchantress has apparently found her new champion - Brute Benhurst. "Tales of Asgard" back-up, "The Wolves of Ravenswood!", script by Tom DeFalco, pencils by Gary Hartle, inks by Mike Gustovich; A pack of wolves is ravaging the countryside; Haaken gathers a posse to go after them; Thor wants to go, and Loki tricks him into it and gives him a faulty sword; Thor manages to hold off the wolves long enough for Haaken to save them, along with a very young Sif.