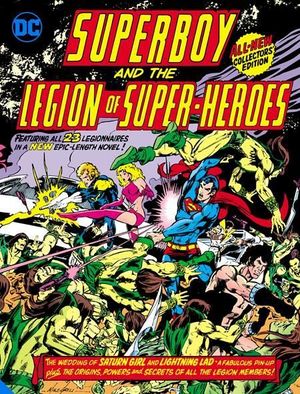 SUPERBOY AND THE LEGION OF SUPER-HEROES TABLOID HC #1

This tabloid-size masterpiece reprints a classic Superboy and the Legion of Super-Heroes story at full size for the first time. Superboy arrives in the future for the wedding of Saturn Girl and Lightning Lad only to find a world totally different from the one he is used to visiting, but the Legionnaires insist it has always been that way. With Superboy unable to convince his teammates that something is wrong, the wedding proceeds as planned, only for the bride and groom to be kidnapped by the Lunarites. Convinced that the altering of history is the real issue, Superboy leads a team of Legionnaires back in time, while the rest of the group attempts to rescue the kidnapped couple. Can Superboy’s team correct the flow of time and save the future? Includes a two-page pinup of the entire Legion by Mike Grell and an eight-page feature containing information on each of the Legionnaires by Paul Levitz, illustrated by James Sherman and Jack Abel.