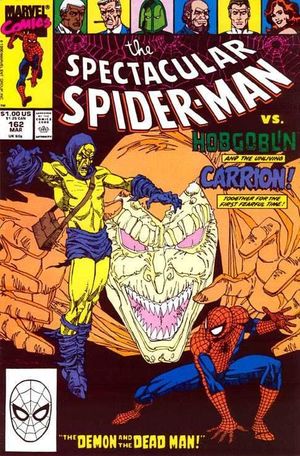 Hobgoblin in "The Demon and the Dead Man!" Part 2 of 3. Script by Gerry Conway. Pencils and Inks by Sal Buscema. Cover by Sal Buscema. The Hobgoblin decides that he needs an ally in order to beat the wall-crawler, so naturally he recruits a dead guy ? Carrion! Strangely though, once Carrion (aka Malcolm McBride) is freed from the Vault, the first thing he wants to do is visit his mother. The bizarre McBride family reunion is first interrupted by the Amazing Spider-Man, and then by the Hobgoblin. Cameo appearance by Mr. Fantastic.