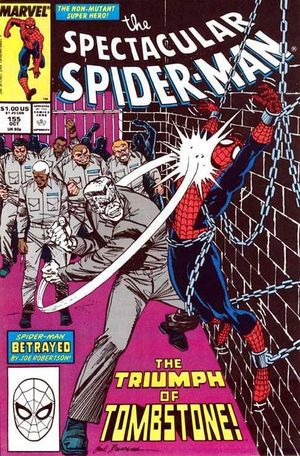 "Crash Out!" Script by Gerry Conway. Pencils by Sal Buscema. Inks by Mike Esposito. Cover by Sal Buscema. Following the conclusion of the New York City gang war, Peter Parker decides that it's time for Spider-man to make another visit to the Lewisburg Penitentiary to check on Joe Robertson. However, Tombstone is lying in wait for the web-slinger and knocks him out in a surprise attack! Now the dazed wall-crawler is part of Tombstone's plan for a prison break via helicopter! Cameo appearance by the Black Cat.