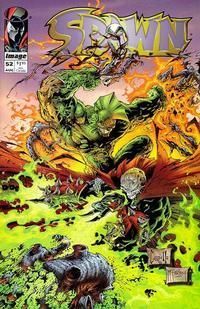 "Messiah!" Guest-starring Savage Dragon. Written by Todd McFarlane. Art by Todd McFarlane, Greg Capullo and Danny Miki. Cover by Todd McFarlane and Greg Capullo. Unbeknownst to either of her parents, the shoelace that lies with Cyan in her bed attached to her soother, is the only physical clue to Terry's mysterious recovery from cancer. Meanwhile, Terry's nightmares continue to reflect Al's experiences and he cant risk sharing his fears with Wanda. In another dimension, Spawn enters Hells fifth level where he is revered by the masses as a returning king and savior. Although he denies his status, he is forced into a confrontation with the Savage Dragon and they battle for the position of the Messiah. Spawn defeats the Savage Dragon and then draws the wrath of his worshippers by freeing him from their stoning. The dwellers of Hell turn on both of them and stone them to death…or do they?