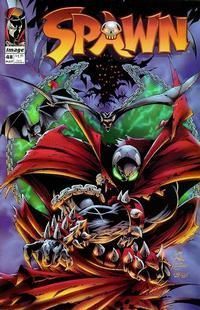 Direct Edition. "The System!" Written by Todd McFarlane. Art and cover by Tony Daniel and Kevin Conrad. While Burke is proudly showing Twitch the stylish new digs for their soon-to-be agency, and ominous envelope arrives under the door. Inside, are photos of men previously linked to Chief Banks, and a request for a meeting. We later learn that Wynn and Clown are behind the deadly set-up. Spawn and Cog have an altercation in Rat City. Enraged, Spawn warns Cog to tell all that he knows, or stay away forever. Terry's suspicions about Wynn's illegal activities are finally confirmed, but as he happily tells Julia that hes found what he was looking for, Wynn enters the room saying that he is anxious to read the results. As Terry laments over the possible danger this poses to his life, he has a brief blackout. Although it is now apparent that something is seriously wrong, he doesn't tell Wanda for fear of upsetting her. Meanwhile, the bums begin to question Al's loyalty and friendship. Spawn finds Bobby alone in the alley and instructs him to tell the others hes left, then disappears to complete a private mission.