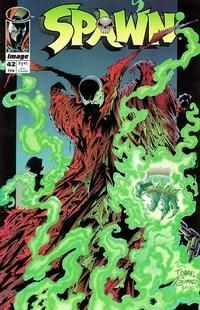 "Fanboy!" Written by Todd McFarlane. Art and cover by Tony Daniel and Kevin Conrad. After escaping from the Curses castle, Spawn hides out in West Virginia, where he meets social outcast, Pat Shaunessy. Pat, comic collector and super hero wannabe, points out the M on Spawns chest. Spawn realizes its similar to the one on Clowns face. Pat ventures out and is jumped by a pack of bullies. Spawns costume takes control, and violently attacks the boys. Pat stops him, saving the boys and making him the school hero. Meanwhile, Sam and Twitch break into Banks office as they get closer to linking him to the murder of Senator Jennings daughter. And Cy-Gor attempts to make his way to New York.