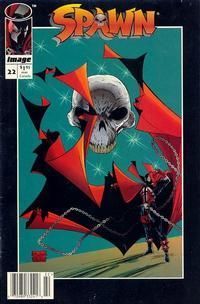 "The Hunt!" Part 2 of 4. Story and art by Todd McFarlane. Tony Twist believes Spawn is actually Terry Fitzgerald, Al Simmons' best friend when he was alive and the man who is now married to Al's widowed wife. But can even the power of Spawn save Terry from the cybernetic killing machine known as Overtkill? Includes a Savage Dragon pin-up by Erik Larsen and an 8-page ad for WildC.A.T.s: The Animated Series.