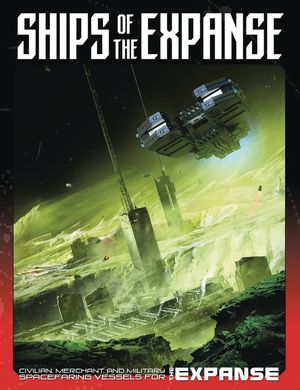 SHIPS OF THE EXPANSE RPG HC

(W) Keith Garrett, Ian Lemke, Mari Murdock, Will Sobel, Nicole Winchester, Jason Mical
The Expanse is vast, and traversing the space between worlds in the solar system requires a ship. For a crew, a ship is freedom, home, safety, and a source of income, but also a source of responsibility and often debt. Out in space, other ships are potential targets, allies, or threats. The Ships of the Expanse offers details on many of the kinds of space ships characters in an Expanse game might encounter, or perhaps even own. From shuttles and racing pinnaces to lumbering ice-haulers and massive warships, the sourcebook describes them all. Ships of the Expanse also features information on space stations and new rules for maintenance and repair, buying and selling cargo, new stunts and hazards, and much more.
In Shops: Oct 27, 2021