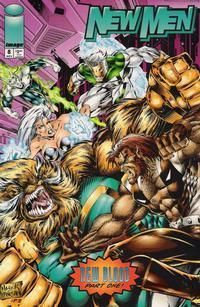 Cover pencils by Todd Nauck, inks by Dan Panosian. "New Blood, Part One - Deception!", script by Eric Stephenson, pencils by Todd Nauck, inks by Norm Rapmund and Lary Stucker; Flying from the Brotherhood of man, the New Men travel through the sewers of Seattle; On their side, Team Youngblood has the order to bring them to the authorities after the murder made by Reign; But the young heroes refuse and the fight begins, and the experienced Youngblood team is far better.