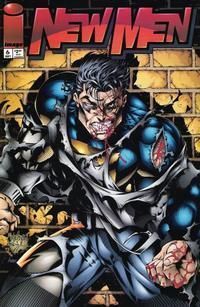 Cover pencils by Jeff Matsuda, inks by Jonathan Sibal. "Deep, Dark Truthful Mirror," script by Eric Stephenson, pencils by Jeff Matsuda, inks by Jonathan Sibal, Lary Stucker, and Jaime Mendoza; Dash learns that Kodiak can transform into his human form - that of a teenage kid; The boys take Reign to a bar to celebrate his twenty-first birthday but end up getting attacked by the Brotherhood of Man; Back home, Dash reveals to Kodiak that she is pregnant and her pregnancy is progressing at an abnormally rapid rate. Pinup, pencils by Todd Nauck, inks by Marlo Alquiza.