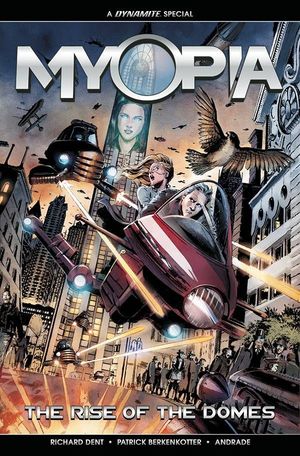 (W) Richard Dent (A) Freire Ronilson (A/CA) Patrick Berkenkotter
A homeless man is mysteriously abducted. A journal is left on the edge of a subway platform, filled with stories about a world that doesn't exist. Not far from here a scientist is murdered in cold blood. The only clues are his burned down lab. A magnetically propelled motorcycle, and a man walking around New York City with the last living falcon on the planet.

Imagine a world where your every thought, your every move, is filtered through The Central Lens Network. Now imagine being a twelve-year old boy and discovering a special pair of lenses that allow you to access this network undetected. This is exactly what happens to Matthew Glen the day his father is murdered then two years later mysteriously appears back in his life.

In a style that echoes back to the Dark Age of Comics when graphic novels were coming into an art form of their own, "Myopia" merges science fiction with noir steampunk into a thrilling alternative reality, where government and big business use entertainment devices to cover up a new authoritarian landscape.
In Shops: May 12, 2021