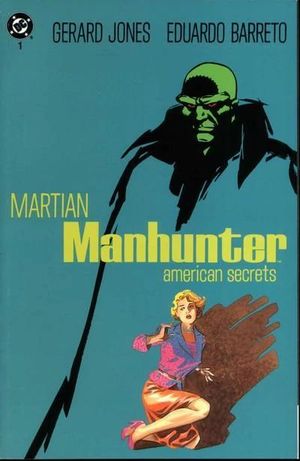 J'onn J'onzz, the Martian Manhunter, arrived on Earth in the decade of innocence. Now, he is hurled into an adventure story through the cultural landscape of the paranoia-filled 1950s in MARTIAN MANHUNTER: AMERICAN SECRETS. The miniseries explores the end of the Golden Age, the origin of the Martian Manhunter, and the hidden history of the DC Universe, as big-city cop John Jones investigates an alien conspiracy to conquer Earth. America in the 1950s was an America different from that of today. It was a country of flying saucer scares, the Cuban missile crisis, quiz show scandals, rock and roll payola, and a web of murder and mystery. The Martian Manhunter must penetrate the mob hierarchy in Las Vegas and Havana as he discovers that aliens, mobsters and communists may be scheming toward mysterious ends. Written by Gerard Jones, with art and cover by Eduardo Barreto