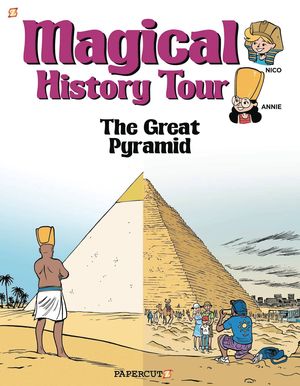 (W) Fabrice Erre (A) Sylvain Savoia
Brand new series where kids travel through time to follow the Threads of History and uncover its secrets! Modern day kids Annie and Nico travel back in time to ancient Egypt. That's about 4,500 years ago, when the world's largest pyramid was built, The Great Pyramid of Giza. It's also called the Pyramid of Cheops because it was built for the Pharaoh Cheops, who wanted to be buried in it when he died. That's right, pyramids are giant tombs! It was the first of seven buildings known as The Seven Ancient Wonders of the World - and it's the only one still standing. But it still has plenty of secrets waiting to be uncovered!
In Shops: Jan 27, 2021