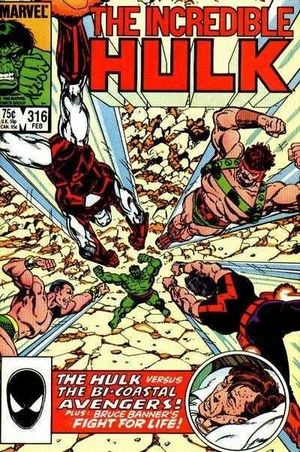 "Battleground!" Guest-starring She-Hulk, Iron Man, Hercules, Wonder Man, Sub-Mariner, and Doc Samson. Story and Art by John Byrne. Additional inks by Keith Williams. She-Hulk arrives to the hospital to find out just what is wrong with her cousin Bruce Banner. Meanwhile, the Avengers (east and west coast) send in their big guns to deal with a Hulk raging out if control. Can even the combined might of Iron Man, Hercules, Wonder Man, and the Savage Sub-Mariner stand against the nigh unstoppable beast known as the Hulk?