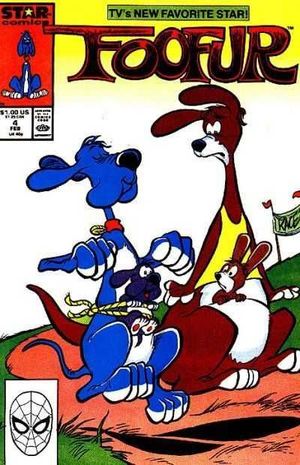 Comic book based on the 1980s Hanna Barbara cartoon of the adventures of Foofur, the giant blue dog. In this issue, to avoid detection, Foofur and the gang devise a series of hideaways in the mansion in "Fernando's Hideaway," then Hazel starts acting strange after seeing a hypnotist's act in "Show Business," and then after Louis backs down from a bully, Foofur tells the story about Louis' dog pack days in "The Buddy Guard." Scripts by Tony Franco and art by Ben Brown & Jacqueline Roettcher.