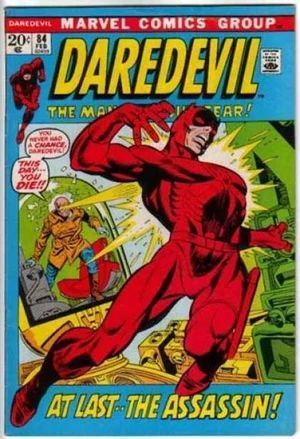 Cover pencils by Gil Kane, inks by Frank Giacoia; Mike Esposito. Night of the Assassin!, script by Gerry Conway, pencils by Gene Colan, inks by Syd Shores; The Widow is in Swizerland when she is approached by a doctor who claims to be able to restore sight to the blind; She sends for Matt who arrives to find that things aren't exactly what they seem; DD and the Widow take down the time-traveling Assassin and end the threat of Mr. Kline and Baal to unmake the future; part 7 (conclusion) of Mr. Kline story.