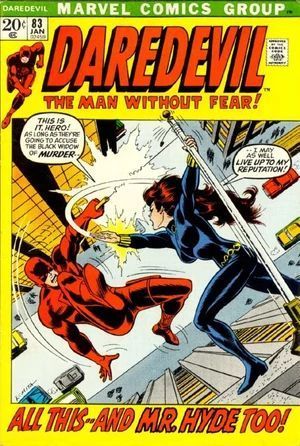 Cover art by John Romita. The Widow Accused, script by Gerry Conway, pencils by Barry Windsor-Smith and Alan Weiss, inks by Bill Everett; DD captures the Widow as she is suspected of killing the Scorpion; Foggy is blackmailed into rushing the Widow to trial with Murdock fighting for Natasha's freedom; When DD attempts to examine the Scorpion's body, he is attacked by Mr. Hyde who blows the place up; With crucial evidence destroyed, the Widow is freed and vows to leave the country.