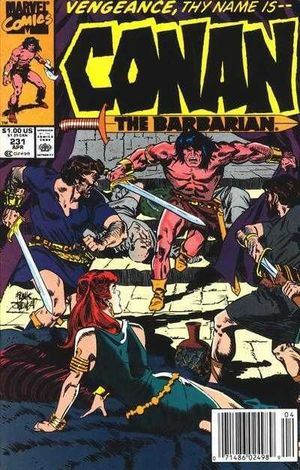 Cover art by Frank Springer (signed) and John Romita (retouches). The Burning Tower, script by Gerry Conway, pencils by Frank Springer, inks by Don Perlin; Conan seeks revenge on Karmanthes, the man who hired and betrayed him; But someone else wants revenge on Karmanthes, too, so it becomes a race to see who gets to kill him first; And both participants are willing to kill each other to get the job done. Pinup by Danny Bulanadi (pencils) and Ernie Chan (inks).