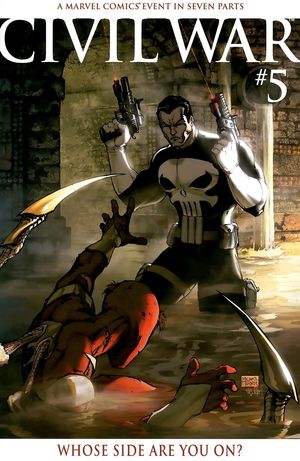 Written by Mark Millar. Pencils by Steve McNiven. Cover by Michael Turner. The super-heroes split as the Civil War heats up! Registration has become law, household names have gone rogue and a Marvel legend makes a decision that will change a life forever. Featuring the New Avengers, the Fantastic Four, the Young Avengers and pretty much everybody else! 1 Featuring villains, villains, villains! Sides change and chaos reigns as the evildoers of the Marvel Universe make their presence felt in a new and shocking way! But when the underworld gets involved, can the Punisher be far behind?