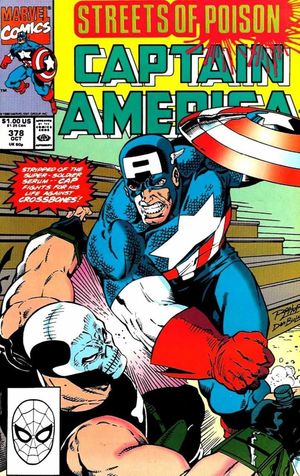 Streets of Poison: Part 7 of 7 - "Grand Stand Play!" Script by Mark Gruenwald. Pencils by Ron Lim. Inks by Danny Bulanadi. It's the awesome conclusion to the Streets of Poison storyline! Captain America (minus the super-soldier serum) wages a life-and-death struggle against Crossbones in the bleachers of Yankee Stadium! While down on the infield, the Kingpin and the Red Skull engage in hand-to-hand combat to settle their drug-dealing differences! Two great fights! Who will be the victors? Cameo appearance by Hank Pym. (Note: The Streets of Poison saga was reprinted in 1994 in a trade paperback.) Back up story: "Grave Concerns" Script by Mark Gruenwald. Pencils by Mark Bagley. Inks by Dan Panosian. The U.S. Agent does not believe that his parents are dead until Battlestar drives him to their burial place in Georgia.