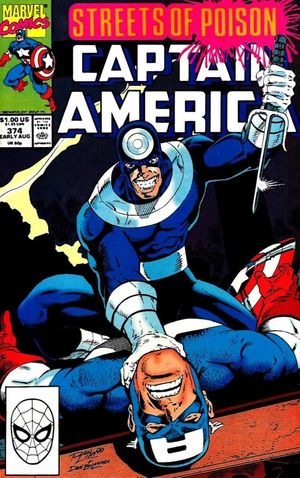 Streets of Poison: Part 3 of 7 - "Falling Out!" Script by Mark Gruenwald. Pencils by Ron Lim. Inks by Danny Bulanadi. Bullseye and Captain America wage a fierce battle for survival on the lower west side! After the master assassin breaks contact and slips away, the super-charged shield-slinger scours the city for more drug dealers. Meanwhile, Diamondback and John Jameson suspect that Cap inadvertently ingested some "Ice" during the warehouse explosion. But before they can act on their suspicion, the duo is gunned down in a drive-by shooting! Cameo appearances by the Black Widow, Daredevil, Kingpin, and Typhoid Mary. Back up story: "Power Tools" Script by Mark Gruenwald. Pencils by Mark Bagley. Inks by Dan Panosian. Battlestar is ambushed by a new group of super-villains called the Power Tools!