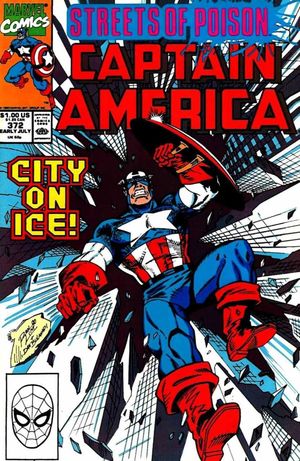 Streets of Poison: Part 1 of 7 - "Sold on Ice!" Script by Mark Gruenwald. Pencils by Ron Lim. Inks by Danny Bulanadi. The Streets of Poison storyline begins with this issue. Cap discovers that one of the employees at Avengers Headquarters has become addicted to a new street drug called "Ice." As a result of his discovery, the star-spangled avenger begins busting the drug dealers in Manhattan. Cameo appearance by Bullseye. Back up story: "Agent Provocateur" Script by Mark Gruenwald. Pencils by Mark Bagley. Inks by Don Hudson. Battlestar is staking out the West Coast Avengers compound in Southern California to look for his former partner John Walker (aka U.S. Agent).